Meditation and it's many Benefits

Mindfulness Meditation is not only an excellent way of managing and reducing stress but there is now scientific evidence that it changes the brain in ways that are very beneficial for our wellbeing. These brain changes include thickening of the cerebral cortex in areas associated with the integration of emotions and attention.

Studies carried out on people who carried out regular meditation over an 8 week period showed significant stress reduction which also correlated with decreased density in the amygdala, which is an area of the brain which plays an important role in stress, anxiety and depression.

The participants also displayed a significant improvement in their general health and well-being and in their social and emotional functioning. They also found that they could complete their daily tasks easier and were less likely to procrastinate.

Meditation has also been shown to decrease cortisol levels which is a hormone released when we feel stressed. It also reduces levels of the hormones norepinephrine and adrenaline which are released when the symphathetic nervous system becomes active which is the body's 'fight or flight' response to stress.

During the meditative practise the parasympathetic nervous system is activated which produces a general relaxation response. Other benefits include reduction in blood pressure, oxygen consumption, heart rate and an increase in blood flow to the internal organs.

“John is a really first class coach who has studied deeply and brought a structured and well informed approach to all the coaching sessions I have had with him. I would recommend him to you.” March 26, 2010 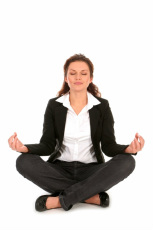 The immune system is strengthened with regular meditation. As cortisol is known to suppress the immune system, people with chronically high levels of cortisol in the body are more likely to be susceptible to illness and disease.

Melatonin is very important for our health and well-being. It is produced by the pineal gland at night. Melatonin forms a part of the circadian (sleep-wake) cycle
and has been shown to boost the strength of the immune system and suppress the growth of breast cancer cells. People who meditate on a regular basis have been shown to have a higher levels of melatonin than non-meditators.

Psychological benefits of meditation include increased energy levels and greater levels of concentration and attention. Also it can increase levels of self acceptance which help to be more accepting of others. Meditation can also alter the structure of the brain, developing the pre-frontal cortex, an area of the brain that is associated with empathy and compassion for others.